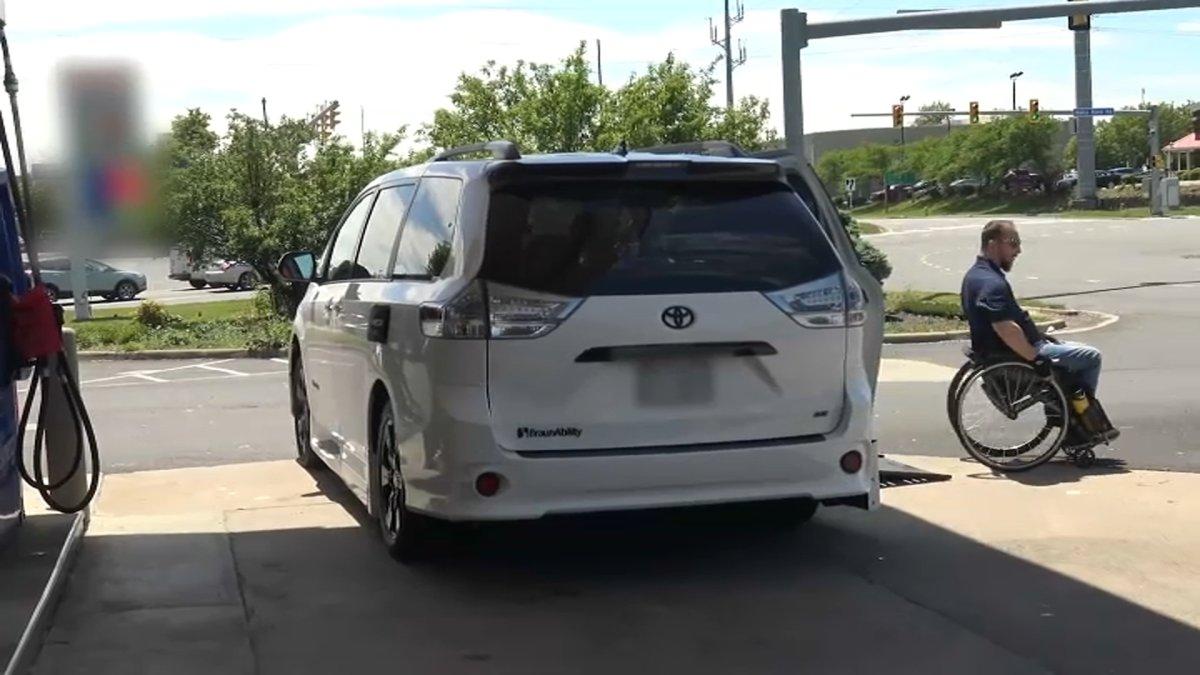 Even though gas is very expensive right now, most people take for granted the simple act of going to the gas station and quickly filling up, but for those in the disabled community, getting gas is more than just a quick trip. It requires plenty of planning.

“Driving is freedom. You don’t realize the freedom until you don’t have it anymore,” said Jesse Graham of Bristow, Virginia.

A 12-year U.S. Air Force Veteran, he made the choice to join the military after Sept. 11, 2001, but when he was 30, a snowboarding accident left him a quadriplegic and in a wheelchair. He’s been determined to not lose his sense of independence, his sense of free will – even with his disability.

Driving is freedom. You don’t realize the freedom until you don’t have it anymore.

“Being able to travel on my own, do my own thing,” he said.

But traveling takes fuel, and for Graham, getting gas takes planning, coordination and extra effort.

He often calls ahead to have someone help him pump the gas, but the help isn’t always available.

That leaves him no other option but to go through the process of getting out of his car to pump the gas – sometimes with dangerous results.

Gas stations are required to provide assistance at the pump, according to the American with Disabilities Act, but only if there’s more than one employee working.

“Right now, there’s no uniform way of, you know, getting that person to come out,” said Lee Page with Paralyzed Veterans of America.

He said in the years he’s been monitoring the issue of accessibility at the pump, it has not really improved.

Some gas pumps do have a call button on them to get an attendant to help, but the buttons are not required.

“Even the big gas stations, they have called buttons, but they hardly ever work,” Graham said.

However, a new smartphone app called fuelService is gaining attention in the D.C. region as a possible solution at the pump.

Kelley Simoneaux, who uses a wheelchair, says it’s been a gamechanger for her.

“I have, like, three kids,” she said. “I’m always, like, going somewhere, you know, having to run around kids, and so it would always be this whole process of, like, how I fit, when do I need gas? How am I going to fit it in?”

The app pairs gas stations available to help pump gas to those users who need assistance. She demonstrated how it works.

“Now that I’m here, I just ask for assistance. It asks me which pump I’m at so it can, like, specifically identify who it is that they’re trying to help,” said Simoneaux. “It will let me know their ETA. Sometimes it’s two minutes, three, four. And I just know when to expect them to come out and pump my gas.”

Josh Basile of Potomac, Maryland, has been driving the fuelService app – which started in the U.K. – here in the U.S.

“It’s just making the whole process easier for both the stations and drivers with disabilities,” he said.

He said more than 1,000 gas stations up and down the East Coast are using the app.

“Over 400 in the Washington, D.C., Maryland, Virginia area,” he said. “So much within the disability community is about awareness. So, letting the community know, letting the world know that this exists.”

“We want to help, and that’s why we want to be a part of it,” said Brandon Riley with Petroleum Marketing Group.

He’s been partnering gas stations with the app.

“We want to make sure that when they come to our facilities, they feel safe, they feel welcomed, and they don’t feel diminished that they need to get fuel and they can’t do it themselves,” he said. “They need help. That’s fine. That’s not a problem.”

More than 8 million people like Graham in this country are living with a mobility issue.

“I know I’m a small percentage of the population, so I don’t expect the world to conform to me,” he said.

He’s heard of the app but hasn’t tried it yet.

“I think anything that that helps and makes things more accessible is always a good idea,” Graham said.

He’d like to also see bigger lanes at gas stations for those in wheelchairs and easy-to-reach intercoms to communicate with those inside.

And, for him, more patience from everyone.

“You know, if you’re watching this on the news and you see it, be polite, treat people the way you would want to be treated,” Graham said.

Reported by Adam Tuss, produced by Rick Yarborough, and shot and edited by Steve Jones.