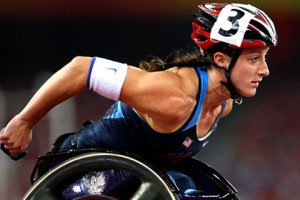 The 2016 Paralympic Games will be hosted in Rio, Brazil from September 7-18. The games will include 23 different sports with a total of 528 events, and athletes who will be representing 176 countries. Here are some of the most inspiring American Paralympic athletes in wheelchairs who have competed through the years, and are looking to win big in 2016.

Tatyana McFadden, an eight-time world champion sprint athlete from the U.S., is looking to sweep all seven distances when she competes at the Rio games. She has previously participated in the Paralympic Games in Athens, Beijing, and London and is fresh off a fourth place title at the 2016 Boston Marat

McFadden was born in Russia with spina bifida, which paralyzed her form the waist down. While growing up in an orphanage in Saint Petersburg, she would walk around on her hands because she did not have access to a wheelchair. It was not until she was adopted at age 6 and brought to her hometown of Clarksville, Maryland that she first got into a wheelchair, and sports followed not long after. As a child, McFadden enjoyed wheelchair basketball, sled hockey, swimming, gymnastics and track & field. In 2004, McFadden competed in her first Paralympic Games, where she won silver and a bronze medal in track & field.

Since then, she has competed in every summer Paralympic games and has become a 10-time Paralympic medalist. If successful in her plan for the Rio games, she would be the first athlete to win all seven distances. “I’ve put in the hard work, the training and the time, so I would love to be on the top of the podium in each race,” McFadden said in an article for Inside the Games.

Heroes desire to be known as athletes

Jared Arambula, 26, will be competing in his first-ever Paralympic Games. Two-time gold medalist at the Junior

Before becoming a member of the Rio 2016 team, Arambula was playing with the Dallas Wheelchair Mavericks, the NWBA 2014-2015 Division Champions. In an article for News Sentinel about his journey to the Paralympics, Arambula’s old coach described him as a, “natural player,” and a, “role model,” with strong, “desire and ambitions.” Arambula has quickly risen to iconic status in the sport, but remains humble. “It’s cool for people to see us as heroes,” Arambula said in an article for News Sentinel. “But someday I want to get to the point where they see us as athletes.”

Since its debut at the Barcelona Paralympic Games in 1992, Wheelchair Tennis has gained outstanding popularity both nationally and internationally. This year, the top medalist from previous games is on the U.S. Team. David Wagner has earned three gold medals, two silver, and one bronze. He is currently ranked number one in the world in both singles and doubles.

At age 21, after landing on his head during a Frisbee game, Wagner became paralyzed from the mid-chest down. After the accident, he struggled trying to find a way to return to his athletic lifestyle. Now, with only 30 percent function in his hands, he has won at the 2004, 2008, and 2012 Paralympic Games.

Like many of their teammates and competitors, McFadden, Arambula, and Wagner have shown great determination and skill. Good luck to them, as well as all of Team U.S.A., in Rio this year.