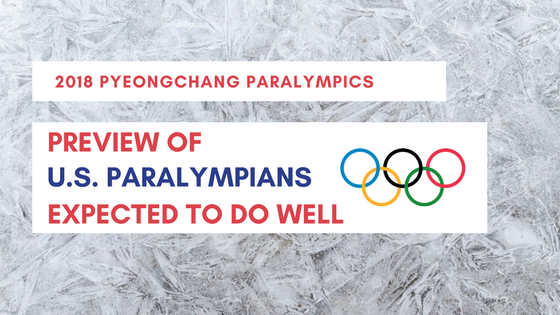 This year’s Paralympic games will be held in Pyeongchang, South Korea and will begin on March 9th and end on March 18th.

The Paralympic games feature 670 Incredibly talented men and women of different abilities, a 24 per cent increase on the number of athletes that competed in Sochi 2014, according to the Paralympics website.

Check out which U.S. athletes you should be on the lookout for during the 2018 Paralympics:

Gretsch won all three gold medals at the 2018 U.S. Paralympics Nordic Skiing Nationals and is now focused on bringing home the gold again.

Gretsch was born with spina bifida and is a wheelchair user, however, once she hits the slopes, she moves with ease, as we can see from her quick transition from the paratriathlon to Nordic skiing. She picked up Nordic skiing in 2015 and qualified for the U.S. national team the next season.

Kendall Gretsch has the motivation, athletic ability, and support to become a two-sport Paralympian and will definitely be a force to be reckoned with this coming March.

Tyler Walker is a 31-year old alpine skier preparing for his fourth Paralympic Winter Games. Walker is trying to battle back after a serious tumble in Sochi during the last winter games. He continually discusses that he plans for the long term; after the Sochi accident, he was looking to how to make his game better for years and years ahead.

Tyler was born with a section of his spine missing and had to undergo surgery to get both of his legs amputated when he was four-years old, but has only become stronger from these experiences. He won his first giant slalom overall world cup when he was still a teen and has continued to perform well throughout his lengthy career.

Walker is a relentless athlete and a courageous role model. He has shared with the world his ups and downs, admitting when he was at his lowest and sharing that it is okay to feel that way. Though this could be Walker’s last Paralympics, he shows a lot of promise in bringing back his first medal for the U.S. team.

Andy Soule is a 38-year old army veteran turned Nordic skier. After the 9/11 terrorist attacks Soule was inspired to join the army and was sent to Afghanistan. In 2005, Soule lost both of his legs to a roadside bomb and after recovering, turned to sports as part of his rehabilitation.

Soule uses a sit-ski that allows him to sit while propelling himself with poles and made history when he was the first American Paralympian to win a biathlon medal. This will be Soule’s third Paralympic Games, and he was just recently announced to be a member of the Nordic skiing team.

Along with being a Paralympic skier, Soule is a ballistic specialist, meaning he can put together and take apart rifles expertly. Soule has many passions, but has always loved physical competition, which is what has driven him to be so successful in years past and hopefully in this year’s coming games.

The final medal events programme for the Paralympic games will include:

• Wheelchair curling – 1 medal event and 48 male and 12 female athletes (each team must have a minimum of one female player).

Keep up with all of the opportunities and achievements available for wheelchair athletes.