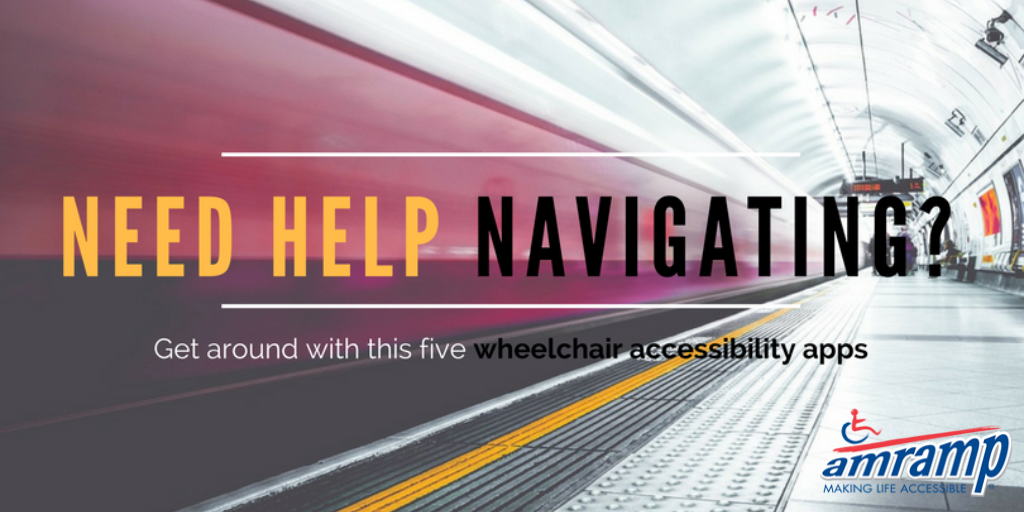 WheelMate lets wheelchair users around the world locate wheelchair-accessible toilets and parking spaces. The WheelMate app currently has more than 30,000 locations across 45 countries – and more are being added every day. Learn more

Wheelmap is based on OpenStreetMap and works similar to Wikipedia – everyone can contribute to improving the accumulated data. The app draws its information directly from the net. All data is always up to date. Learn more

According to an interview with the Huffington Post, Access Earth founder and creator Matt McCann started working on the app after he booked a stay at a hotel that had advertised itself as wheelchair accessible, only to find that it was not. Access Earth members “give each other the specific information they need to try new restaurants, hotels and tourist attractions without worrying about accessibility.” Learn more

With stairways to the subway and lack of signage, those are only a few of the many accessibility challenges wheelchair users can face while in New York City. Wheely features accessible subway maps licensed by the MTA®, specific directions and maps to subway elevators and reviews based on local accessible places. Wheely is founded by Anthony Driscoll, a Parsons New School MFA Design and Technology candidate, who was inspired to create this app through his travels with his father who is diagnosed with Multiple Sclerosis. Learn more

AXS Map pulls destinations—restaurants, attractions—from Google Maps for users to rate how accessible they are. The app encourages hands-on engagement with the “Mapathon” functionality. The concept of Mapathon is to host a community event to go out and rate accessibility in your neighborhod. If users prefer not to start their own Mapathon, they are also able to join Mapathons with the guidance of AXS maps. Learn more

Although the app is still in development, the world’s first fitness tracker for wheelchair users will take accessibility to the next level for. There is a mounted mechanism attached to the wheelchair that works via Bluetooth that calculates four key factors of wheelchair movement, as well as collects data to map navigable routes for other parties with accessibility needs. Freewheel is being developed by Chaotic Moon Studios in partnership with Accenture. Learn more